9:00 pm Ernesto Diaz-Infante - solo electric guitar François Couture, All Music Guide--"Since the mid-'90s, Ernesto Diaz-Infante counts as one of the most prolific avant-garde composer and improviser the U.S. West Coast has seen. He has performed and recorded music on piano, prepared guitar, and electronics; composed chamber music; improvised with a very large number of musicians from California, New York, and Chicago; and released a pile of CDs on very small independent labels such as Pax Recordings, Sweetstuff Media, Zzaj Productions, and Public Eyesore. His multifaceted career gives him the look of an eclectic or maverick artist, but the persistence and commanding seriousness with which he pursues his career is gaining him a small but dedicated following." Ernesto Diaz-Infante’s musical compositions span a broad perspective: transcendental piano, noise, free improvisation, avant-garde guitar, field recordings, lo-fi four-track manipulations, and experimental song. ED-I has performed throughout Europe and the United States, and his music has been broadcasted internationally. He runs the music label Pax Recordings, and has released over twenty recordings on his own and others’ labels. Born in Salinas, California, ED-I is Chicano (Mexican ancestry). He received his BA from the College of Creative Studies at University of California, Santa Barbara and his MFA in Music Composition from California Institute of the Arts. He co-founded the Big Sur Experimental Music Festival (1999-2004) and the San Francisco Alternative Music Festival (2000-2003). Some of his most recent work are his solo guitar compositions For M.F. and Discipline and Denial, which was chosen as the best experimental music on Bandcamp in March of 2019. ED-I composed the music for filmmaker Marjorie Sturm’s film The Cult of JT LeRoy. Ernesto Diaz-Infante lives in San Francisco with Sturm and their two children. Short version: Ernesto Diaz-Infante’s musical compositions span a broad perspective: transcendental piano, noise, improvised music, avant-garde guitar, field recordings, and experimental song. He received his MFA from CalArts in Music Composition, where he studied with Stephen L. Mosko and Wadada Leo Smith. He lives in San Francisco with filmmaker Marjorie Sturm and their son and daughter. https://ernestodiaz-infante.bandcamp.com/album/live-at-the-luggage-store-gallery $10-20 sliding (no one turned away for lack of funds) Masks welcome indoors. Vaccination and booster shots highly recommended. If you feel ill, please do not attend.

Musician and seeker Suki O’Kane returns to Shapeshifters to enact 10,000 things, a score for durational performance, to mark the fall equinox. The piece starts 10,000 seconds before, and lasts a minimum of 10,000 seconds after the equinox itself, which will be observable at 6:03pm Pacific Daylight Time. Expect ritual acts of body, speech and mind, walking meditation, live cinema, durational sound, food, sunset, civil twilight, and the setting of a waning crescent moon. The show starts early at 6pm (the equinox arrives at 6:03pm) with a solo set from Ernesto Diaz-Infante, complementary autumnal food and drink at dark o'clock, and at 8pm two sets: the first Phoebe Tooke leading a visual conduction for an improvising ensemble comprised of Dyemark, Wayne Grim, Jacob Felix Heule, Suki O’Kane, Adria Otte, and special guests; the second reconvenes the artists from the 2022 spring equinox realization of the 10,000 things score enacted on the back deck of Shapeshifters with Alfonso Alvarez, Dyemark, Suki O’Kane, and special guests. Cost: $10 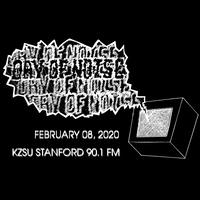 Listen on the radio at 90.1 FM, online at https://kzsu.stanford.edu or watch the video livestream at http://tinyurl.com/Noise2020.

The lineup transcends genre. You will hear all sounds strange and beautiful from a variety of acts among literally dozens of artists on the bleeding edge of creative musical expression through noise.

The Day of Noise continues to be both a marvel of committed engineering as well as a tribute to the ability for modern free form radio to create exciting interactions of community creativity.